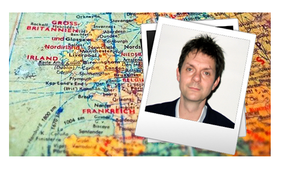 At the invitation of the Fryske Akademy, Robert McKenzie (Associate Professor in Sociolinguistics, Northumbria University, UK) will give a presentation on his research into linguistic prejudice and attitude change in England.

Measuring implicit and explicit attitudes and attitude change: Evaluations of BATH use in England

This talk details preliminary findings of an ongoing British Academy-funded project (McKenzie and McNeill, 2023) examining English nationals’ implicit and explicit status (competence) and social attractiveness (warmth) attitudes towards Northern English [a] and Southern English [ɑː] in the BATH lexical set. Study 1 (N=306) incorporated status-associated traits within a specially constructed Auditory-Implicit Association Test (IAT) and a self-report magnitude estimation scale. Multivariate analysis found participants from both the north and the south of England rated the Southern English speaker more positively in terms of status at implicit as well as explicit levels of evaluation. By contrast, Study 2 (N=240) employed social attractiveness-related traits in the IAT and self-report measures. Further inferential analysis suggests a divergent pattern between implicit and explicit social attractiveness evaluations. In both Study 1 and Study 2, complex interaction effects between the English participants’ level of Social Dominance Orientation (SDO), strength of regional affiliation, age and gender upon their automatic and self-reported attitudes were also uncovered.

It is argued that the study findings underline the value of employing a dual processing framework, involving the use of implicit and explicit attitudinal measures, to help sociolinguists better understand the complex, and often compensatory, evaluations which individuals hold towards language variation within and outwith England. The results also demonstrate how analysis of implicit-explicit attitudinal discrepancy can help uncover, and identify the groups leading, language attitude change in progress and help understand relationships between changes in linguistic evaluations and usage within the community under investigation.

Robert McKenzie is Associate Professor in Sociolinguistics at Northumbria University, UK. Robert’s research is focussed principally in the areas of variationist sociolinguistics, folklinguistics and the social psychology of language. He has a particular interest in public perceptions of and attitudes towards spoken language variation.

Robert has published widely and his second monograph, Implicit and Explicit Language Attitudes: Mapping linguistic prejudice and attitude change in England was published in July 2022 (Routledge).

Robert’s research has featured in a large number of newspapers, television and radio outlets both within and outwith the UK and he is founding director of the Speaking of Prejudice project.