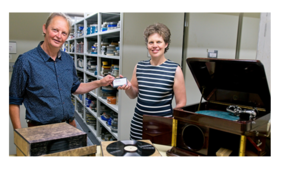 In cooperation with the Fryske Akademy and Tresoar, the Fries Film & Audio Archive (FFAA) has had a series of 75 year old 78rpm records with Frisian dialect recordings from 1927 digitised. The recordings can be listened to online. The records have been professionally digitised by Picturae in Heerhogowaard, who even purchased special equipment for this purpose. The recordings are of historical and linguistic value. We can hear how the Kleifries, Woudfries and Frisian of the Southwesthoek, the Dokkumer wouden and the Dongeradelen sounded in the 1920s. Also the Hindeloopers, Aasters and Westers (Terschelling), Schiermonnikoogs and Bildts of a century ago have been recorded on the shellac plates. Besides our Westerlauwers Frisian, there are dialects from East and North Friesland in Germany and Denmark on the records. These have also been digitised.

'Such records are indestructible, so that one can still hear a Terschellinger or Hindelooper talking through a gramophone in a thousand years' time', writes Geert Aeilco Wumkes, librarian of the Provincial Library (now Tresoar), in 1926. He is enthusiastic about the plan to record the dialects of the three Frisian languages on gramophone records: North Frisian, East Frisian (Sater Frisian) and Westerlauwers Frisian (the current Frisian in the Province of Friesland).

Four years earlier the 'Lautabteilung' (audio department) of Berlin University started the prestigious project of recording all German dialects at home and abroad with a phonograph on so-called 'shellac plates'. These are plates coated with shellac, originally a secretion product of lice with various industrial applications (such as the glazing agent E904).

The recorded texts include sentences that are also used for the German language atlas (the Wenker sentences) and eight sentences by Siebs himself (the Siebs sentences). Furthermore, the biblical story of the Prodigal Son (Luke 15:11-32) will be recorded. The language varieties from the following areas are recorded: Hindeloopen, Schiermonnikoog, Terschelling, Ferwerderadeel, the Dokkumer Wouden, Dongeradeel, the Kleistreek, the Wouden, the Zuidwesthoek and Het Bildt.

Importance of the recordings

Siebs' recordings are the oldest systematic audio recordings of the three Frisian languages and their dialects. They give us insight into the changes in pronunciation and grammar of spoken Frisian over the past 100 years. Among the speakers are some historically famous leaders of the Frisian movement, such as Douwe Kalma, Jan Jelles Hof, Jelle Brouwer, Eeltsje Boates Folkertsma and Onno Harmens Sytstra. There are recordings of dialects that have become extinct, such as that of the last speaker of Wangeroogs, a dialect of East Frisian.

All dialect recordings on the shellac plates are now available online. You can listen to them on archieven.nl (collection Fries Film en Audio Archief) and on the Soundcloud channel of the FFAA.