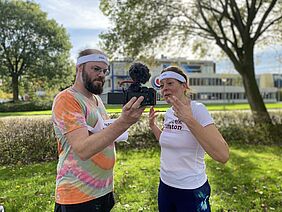 With this project the province, together with its partners, wants to collect 300 hours of recorded Frisian. Everyone who speaks Frisian can participate via ynsprekmaraton.frl. The Fryske ynsprekmaraton runs until February 21, 2023, the international day of the mother tongue.

Commissioner Sietske Poepjes: "For the future of Frysian it is important that we can use Frysian in our communication with mobile phones or apps. In this way the new generation will also be able to use it and the language will remain vital. I invite all Frisians to let hear their voice'.

For the preservation of the Frisian language, it is important that Frisians can also use the language in the digital world. With the speech marathon, the province is working on a collection of phrases spoken in Frisian. Such a "dataset" is the basis for making speech technology. About 300 hours of spoken Frisian are needed for a good dataset. The province uses the software Mozilla Common Voice for this purpose. With this dataset a technology company, for example, can make speech-driven applications for the Frisian language. It can also be used by hobbyists.

Ynsprekmaraton.frl
Anyone who speaks Frisian can say phrases online on the website: ynsprekmaraton.frl This can be done via phone, tablet or computer. Differences in regional pronunciation are not a problem. In fact, that is important when building the dataset. Similarly, it is important that there are recordings of both male and female voices of all ages. 135 hours of material have been collected so far.

In order to make the Fryske ynsprekmaraton known among Frisians, Eduard Rekker, the 'Fryske vlogger' and ambassador for the project, travels with his speech camper to various events in Fryslân. There are also several vlogs to call on Frisians to participate in the speech marathon. For this project, the province is collaborating with Mozilla Common Voice, Afûk, Fryske Akademy, NHL Stenden, Omrop Fryslân, RUG Campus Fryslân and Tresoar.  The Fryske Akademy compiled the phrases to be voiced.