Saturday 12 November marked the European Day of Languages. The European embassies in Hanoi, Vietnam seized this holiday by organising a large language festival with short presentations on various European languages at the Goethe Institute there. As the theme this year was `valuing all languages', the Dutch embassy had invited Jelske Dijkstra (Fryske Akademy/ Mercator) and Phat Do (RUG/ Campus Fryslân) to give a lecture on Frisian.

Do, who is from Fietnam, spoke in his own language about his PhD research at RUG/ Campus Fryslân where he is working on a Frisian computer voice. He talked about the challenges he faces when programming a computer voice for a small language like Frisian, and how he tackles those challenges. Do ended with a demonstration of his voice as it currently sounds (the voice is not yet fully developed) with Frisian phrases such as "Bûter, brea and griene tsiis, wa't dat net sizze kin is gjin oprjochte Fries" and "It wie moai om inoar te treffen".

Dijkstra then gave an English-language lecture on the Frisian language and culture in which she talked, among other things, about the origin of that famous phrase by Grutte Pier. She also talked about the similarities of the Frisian language with English, Dutch and German, discussed the number of people who can speak and understand Frisian, and talked about typical Frisian (summer) sports such as kaatsen, skûtsjesilen and fierljeppen.

Meanwhile, the audience was enjoying imported dúmkes biscuits. In fact, Dijkstra had sent a box of dúmkes, Frisian flags and promotional materials from Fryske Akademy, RUG/ Campus Fryslân, Afûk and the Province of Fryslân to Hanoi in advance. The audience in the hall at the Goethe Institute found it all very interesting. 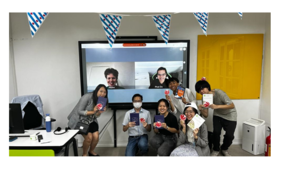