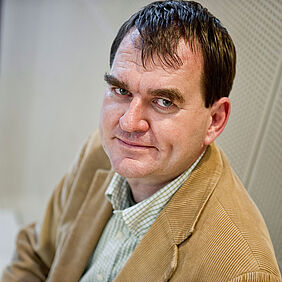 Hans Van de Velde (Zele, 1969) became interested in dialectology and socio-linguistics during his studies in Ghent (Belgium). He went on to study language variation and language change in Nijmegen, where he obtained his doctor’s degree in 1996 for his thesis on changes in the pronunciation of the Dutch language. In 1997, he returned to Belgium where he started working as a lecturer in Dutch at the Université Libre de Bruxelles. He expanded his field of research to language testing and language acquisition. In 2002, he became a lecturer and researcher at the University of Utrecht, where he played an important role in the development of the cooperation with China, and became coordinator of a Master programme.

In November 2014, Van de Velde moved north to work as senior researcher in sociolinguistics with the Fryske Akademy. As a member of the management team, he is responsible for drafting the new research agenda, expanding the research facilities, acquiring new research projects, and national and international cooperation. His own research focuses primarily on the pronunciation of Frisian and Dutch in Friesland, the evaluation of variations, and the development of experimental sociolinguistics.

In addition, Van de Velde is a member of the board of the Stichting Nederlandse Dialecten (SND), co-ordinator of the European Chinese network ILCI (Industrialization, Language Contact and Identity Formation in China and Europe), editor of n/f (journal for Dutch studies in French-speaking Belgium and France), member of the editorial staff of Taal en Tongval and the Dutch Journal of Applied Linguistics (DuJAL), and visiting professor at the University of Pennsylvania (2002), the University of Florida (2006) and the University of Nanjing (2010 and 2015).