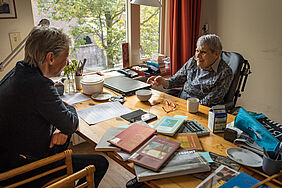 It was the first interview in a series that will eventually count around 10 interviews. Earlier this year, Spoelstra already held a couple of lectures on this project, in Edinburgh and in Leeuwarden. There has also been an article by her about this project in Ensafh, issue 4 this year. The lecture Janneke Spoelstra held on the Frisian Humanities Congres at Leeuwarden last September, is readable at Ensafh.

It is a project as part of the Redaksje Literêre Rigen and is intended as an update of Jelma Knol's 1993 book Ut syn aerd wei froulik, de Fryske dichteressen en it misferstân. The Afûk will publish the new interview collection.